Editor’s note: Today we continue our series on the seven sins of consumer psychology from the presidential address of professor Michel Tuan Pham at the recent conference of the Society for Consumer Psychology. Read the introduction here.

Our field is also too narrow in the way it defines what consumer knowledge is and how it should be generated. Most of the knowledge that we produce is of the relational type, whereby we link theoretical constructs to one another, say, expertise and depth of search, and then use these theoretical relations to explain some substantive phenomenon of interest. Within this dominant epistemic view, the primary path, by far, has been the hypothetico-deductive (or “theory-driven”) path, whereby constructs are first related to one another to generate some theoretical hypotheses, which are then tested with empirical data that are meant to capture a phenomenon of interest (Lynch et al. 2012). As summarized by Lynch et al. (2012), one of the major criticisms of this style of research is that because the primary emphasis is on testing construct-to-construct relations, the connection between the tested theoretical relations and genuine consumer behavior phenomena is often tenuous. Such papers are often criticized for being pure psychology rather than about consumer behavior. Still many of these papers continue to appear in our journals because this style of research tends to be evaluated more based on the rigor of the test than based on the interestingness or importance of the phenomenon to be explained. 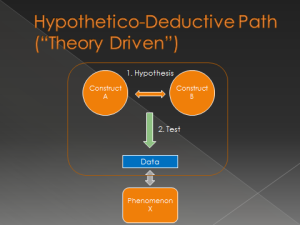 Partly as a reaction to this criticism, there have been recent calls to pursue an alternative path to knowledge generation that is more phenomenon-driven (or effect-based) (Janiszewski 2009; Deighton et al. 2010; Lynch 2011, Park 2012). This alternative path is also relational, but it starts with empirical observations that seem to generalize, which the researchers then try to explain theoretically through a process of induction. Good examples would be research on the attraction effect (Huber, Payne, and Puto, 1982), the mere measurement effect (Morwitz, Johnson, and Schmittlein, 1993), and recent work on various embodiment effects (Hong & Sun, 2012; Lee & Schwarz, 2010). I personally find this expansion of our epistemology healthy, provided that the phenomena are robust and meaningfully related to consumer behavior, which are non-trivial caveats. 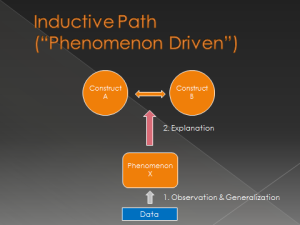 Still, our epistemology should be expanded yet further. Whether we choose the traditional hypothetico-deductive path or the more phenomenon-driven path, most of our research is still about documenting some relation between phenomena and theoretical constructs and between constructs. Whenever such theoretical relations are missing, we usually look down at the empirical observations, disparaging them as mere “descriptions” (Alba 2012). Yet, one could argue that some of the most useful insights about consumer behavior came from studies that were essentially descriptive. Classic examples include the Hoyer (1984) observation that consumers actually do very little search when in the aisle of a supermarket, the Dickson and Sawyer (1990) finding that grocery shoppers have very poor knowledge of the products they bought, and Hauser’s findings that typical consideration sets contain between 3 and 6 product alternatives and account for most of the uncertainty in product choice (Hauser 1978; Hauser & Wernerfelt, 1990) (see Lynch, 2011 and Lynch et al. 2012). Interesting descriptive observations have also been advanced by applied consumer researchers such as Paco Underhill (2008). For example, Underhill describes the notion of a “decompression zone” when typical shoppers enter a retail store. The decompression zone is the area (both in time and space) that the consumer needs to switch mentally between the outside of the store and being ready to start shopping. According to Underhill, information that is presented within the decompression zone, is effectively tuned out by the consumer. Although I am not aware of any “scientific” test of this notion, field observations by myself and by my MBA students suggest that the phenomenon is real. This is an example finding that has enormous managerial relevance and yet is treated as having low status within our field. We need to have greater tolerance for descriptive research if it tells us something that (a) we didn’t really know about consumers, (b) is general, and (c) is useful from a substantive standpoint.

Another way in which I recommend that we expand our epistemology is the production of our theoretical hypotheses. When we use the hypothetico-deductive path, we usually generate the hypotheses ourselves based on our understanding of prior academic literature combined with our own substantive observations and intuitions. My impression is that we are pretty good at generating hypotheses that are logically sound and consistent with the literature. However, we are not equally good at generating hypotheses that are important from a substantive standpoint. On the other hand, there are other people who are pretty good at generating hypotheses that are important from a substantive standpoint, but not good at testing their hypotheses. The people that I am referring to are industry consultants. The marketing industry is full of consultants who generate their own “theories” about consumer behavior—theories that are tailored to be seen as relevant by corporate executives and policy makers. Yet, most of these so-called “theories” are not real theories in the sense of being supported by rigorous empirical evidence or prior scholarly literature: they are just speculations that businesses find interesting and believable. I think that these speculations are a treasure trove of interesting hypotheses that we should be willing to test as a field. Rigorous testing is something that we are very good at, much better than the industry. It is our responsibility, as a field, to verify or disprove some of these industry-generated “theories” about consumer behavior. 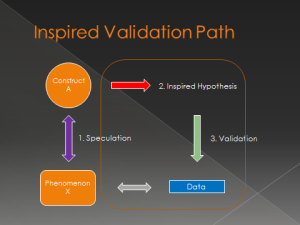 The new epistemic path that I propose, therefore, is one in which we let industry professionals generate their own relevant “theories”—in other words, we “outsource” that part—but then seize on the more popular “theories” to transform them into inspired testable hypotheses that we next submit to empirical validation. Even though we may not generate the original theory, we would still perform a very important function as consumer scientists: that of providing empirical validity to or debunking widely used “theories.” A recent but rare example of research that followed this inspired validation path is a paper by Brett Martin (2012) in JCR, in which the author tested a phenomenon first identified by Paco Underhill called the “butt-brush effect.” In his book, Underhill (1998) reported noticing that whenever a female consumer is accidentally touched from the back by another consumer while shopping, she tends to interrupt her shopping and often leaves the area. In a carefully conducted field experiment, Martin (2012) verified that it was indeed the case. I was not involved in the review process for this paper, but I am pleased that it was published because such papers need to be encouraged rather than discouraged simply on the ground that the original theory emerged from the industry.